bymarqueslamb
You are here:
← All Topics

Cold staking requires two Guapcoin wallets: one to hold the funds (this is typically a desktop GUI wallet and is called the owner wallet) and another one, the hot-node, to do the staking (this needs to be online 24/7, is called the staker wallet, and is typically a linux daemon wallet set up on the virtual private server or vps). The following instructions assumes that the owner wallet is a desktop GUI Guapcoin wallet (version 2.3.0 or later), and assumes that the staker wallet is a linux daemon wallet (version 2.3.0 or later) running on a vps.

In order to setup cold-staking, you need to perform the following steps (either with the command-line interface CLI or with the graphical interface GUI):

Once these steps are complete you will have a staker <-> owner pair such as below:

Copy the staking address down. You will need later for step 3.
2) Generate an “owner address” from the owner wallet
Owner addresses are regular Guapcoin addresses and will start with a “G”. Their private key can be used to redeem delegated coins. Creating an owner address is the same as creating a receiving address. They must belong to the owner wallet (the one that has ownership of the coins). For purposes of these instructions it is assumed that the owner wallet is a Guapcoin wallet (version 2.3.0 or later).

Use the Desktop wallet (GUI)
To get a new owner address, click on “RECEIVE” along the left side to open the Receive tab, and click “Generate address”:

You don’t need to create a new owner address for each delegation. You can reuse your previously generated addresses.

3) Create a “cold stake delegation”
This is the main step. To delegate coins you need to send a special “delegation contract” transaction.

Use the Desktop wallet (GUI)
A. Make sure that coldstaking is enabled by clicking on the coldstake ‘snowflake’ button on the top right. If you can see the ‘COLD STAKING’ button along the left of screen then coldstaking is already enabled.

B. Click on “COLD STAKING” along the left side to open the Cold Staking tab. Then click “Delegation”. 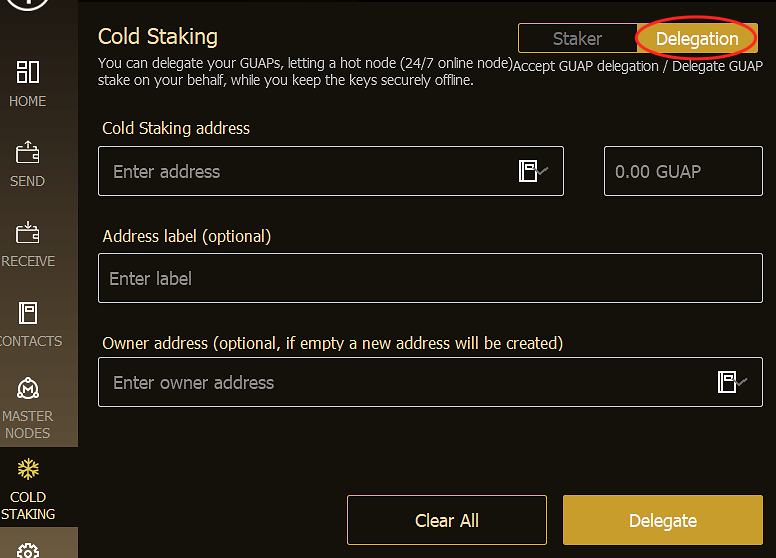 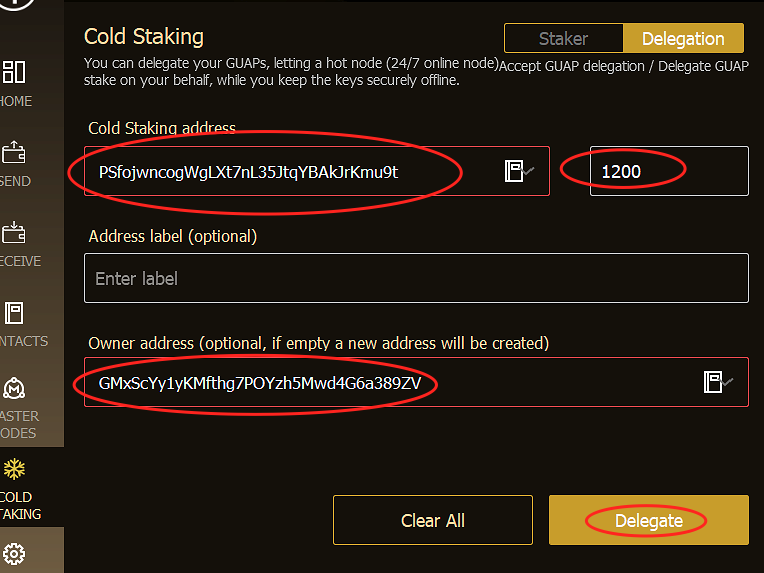 Additional Cold Staking functions
These are other commands that can be used via the debug console or guapcoin-cli.
Check the help for more info on each one.